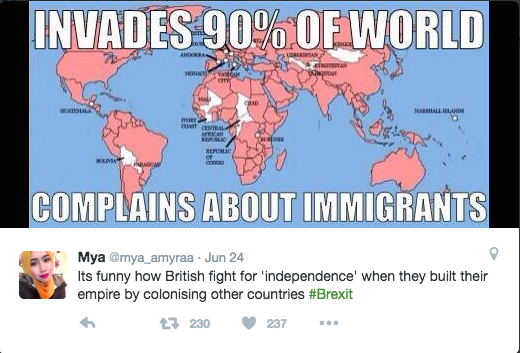 On 26 May I joined in Guyana’s Jubilee celebrations, marking 50 years of independence from British colonial rule. A month later, I find that while I’ve been away Britain has gone and had its own independence day. At least that’s what UKIP leader Nigel Farage crowed after the results of the Brexit referendum were announced.

The irony is not lost on many. After centuries of empire building, the nation made rich off the back of slavery, exploitation and mass theft of resources has thrown off the yoke of European autocracy and is free. “Britons never will be slaves”, as flag-waving attendees of The Last Night of the Proms lustily sing every summer. Forgive me if I don’t bring out the Union Jack bunting just yet.

Viewing Brexit from Guyana has been an interesting experience. First of all I have to guiltily admit I didn’t vote – for the first time in my life – due to a combination of bureaucracy, laziness and complacency, which meant I didn’t get my proxy voting application in on time. Perhaps I have no grounds to discuss the referendum, but I’m going to anyway.

Speaking to friends here and back in the UK, Brexit is the talking point. Though I sense that people here in Guyana are asking more out of politeness and vague curiosity than any real fascination in the geopolitical affairs of the country they were once forced to call ‘the motherland’. There is some coverage in the local newspapers though, including editorials on what Britain’s departure will mean in terms of the EPA (Economic Partnership Agreement), trade (Guyana exported €192m to the EU in 2013, and imported about €122m) and EU funding streams for the Caribbean.

“It is most unlikely that the 27 EU countries, which had no historical relationship with, or colonial responsibility for, the English-speaking Caribbean, will want to maintain the level of official aid and investment that now exists,” wrote Sir Ronald Sanders, Antigua and Barbuda’s Ambassador, in Kaieteur News. Investment, I’m guessing, like the Gy$2.2bn in budget support that Guyana received from the EU on Monday.

But does Guyana really benefit from this assistance? Have things changed in this country because of foreign aid and investment, or because of local entrepreneurship and partnerships not involving the EU at all?

The British High Commissioner to Guyana, Greg Quinn, promised in a recent Facebook video message, “We will stay a close friend of Guyana and we will stay committed to Guyana”. I’m not sure Guyana is that bothered. When people want to emigrate it seems to be for the US and Canada, these days, not the UK. Minibus drivers hang small stars n stripes on their rearview mirrors, not Union Jacks. Just 11% of Guyana’s exports are bound for the UK, compared to 28% for Canada and 17% to the United States.

The days of the British empire are mercifully numbered. And everyone’s starting to adjust to the new world order. And ask, hang on, why does this small island get a bigger say than us? The UK senses this, but can’t quite face up to its waning power. By voting to leave the EU, the ‘Out’ camp has seized on that last, desperate battle tactic: batten up the hatches, raise the drawbridge and try to pretend you’re safe behind those big stone walls. While the Remainers said, I don’t want to live life that. Let’s talk to our neighbours and see what we can work out.

It seems foolish to leave an institution then spend the next however many years trying to build up the same relationship from outside. Like breaking up with someone, screaming ‘I HATE YOU!’ and expecting they’ll still cook you dinner, lend you stuff and have you over anytime you like – but, you know, just as friends. Yeah sure, that’s gonna happen.

In Guyana, there is anger at foreigners coming in to steal resources and wealth from Guyanese hands, but this is mostly reserved for big business from China, America and Europe. Not struggling individuals seeking a better life for themselves and their families, as with EU migrants coming to the UK.

I’m proud of my UK brothers and sisters who fight against racial prejudice, stereotypes and misinformation. And I try to remain tolerant with those who talk about the country being ‘taken over’ – while still challenging them – because (like with every wave of xenophobia the UK has seen) they’ve been told that our problems lie at the feet of migrants, not our own self-serving political and economic elite.

No wonder they seek comfort in the extreme right. They are ignored by Labour, the Conservatives and other mainstream parties who dismiss them as bigots, without listening. As much as I detest the British National Party, would you get David Cameron or Jeremy Corbyn talking to people on a level like the BNP man in the video below? No. They’d sneer and mock them. And we ask ourselves why so many folks used the referendum as a protest vote.

But I’m embarrassed too. By the worrying signs of increased racism on the streets. By the people who represent us on the world stage, like Farage and Boris Johnson. I can imagine now what it feels like to be American and have Donald Trump as your presidential candidate. The global impression of the UK right now is a bratty little kid jumping up and down saying ‘Stop telling me what to do. I’m a big boy now. I don’t need you’ – forgetting that he still lives at home and gets his pocket money from his parents.

When you’re a hero to nationalistic, far-right groups with a hazy dream of going ‘back’ to some monocultural paradise that never existed, you know you’re not doing something right.