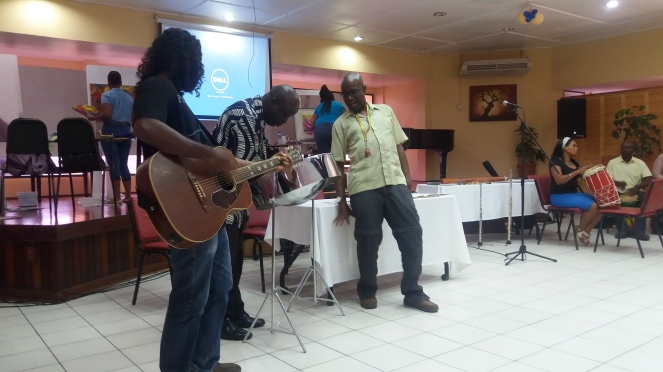 You can’t escape birdsong in Guyana. From the caw caw of the wild parrot and macaw to the omnipresent kis-ka-dee, kis-ka-dee. For Guyanese flautist Keith Waithe, these are not just background sounds – but inspiration. Now ‘The Flute Man’ is planning on creating what he calls a birdsong symphony, taking his cue from Guyana’s dawn chorus.

Normally based in London, Waithe is in Guyana as the University of Guyana’s artist-in-residence – the first person to hold that post since Martin Carter. At a workshop, held yesterday at UG, he hosted an Improvisation Workshop – to introduce music fans and performers to his repertoire and research.

“I have over two hundred flutes!” he said, and proceeded to demonstrate a few. The alto flute, the Irish penny whistle, the clay ocarina… swooping from bird sounds to classical music to masquerade to a kind of mouth percussion mirroring the sound of Indian dhol drums. 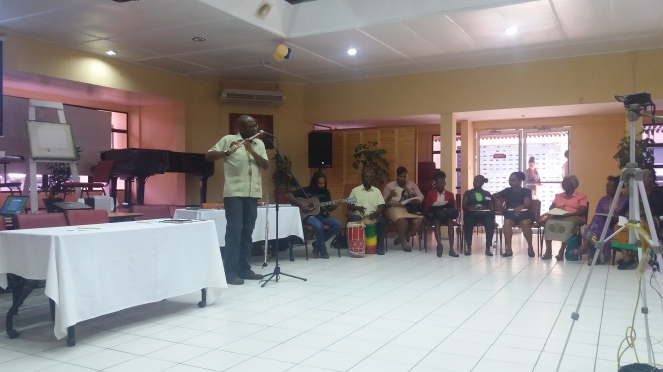 From India, we were taken to Africa and some Guyanese kwe kwe rhythms, performed with the help of a guest drummer and an impromptu performance from National School of Dance director Linda Griffith. Then, after a brief stop in China and the world of classical music, it was on to Guyanese folk as Feed The Flames frontman Gavin Mendonca performed ‘Small Days’ and a steel pannist was called up from the audience to join in.

“Show us a conversation between the flute and steel pan,” requested one participant, “this is an improvisation workshop after all!” Waithe and the pannist duly obliged, and ended the workshop with a lively jam session.

Having a musician as an artist-in-residence is an interesting step for the university, which offers three music programmes: Associate of Arts (Music/Creative Arts), Certificate in Education – Music Education, and Diploma in Music (none are on the 2017/2018 course list but that seems to be an omission).

Yet music isn’t an island. At the workshop, students from the art department were invited to paint while the session was in progress. The experiment drew some great results, including this piece (see below) – inspired, said the artist, by Waithe’s reference to his many flutes.

Students and interested folk in Berbice can enjoy the workshop when it’s repeated next Wednesday (29 March) at UG’s Tain Campus (10am-12pm). Other upcoming events to look out for include a concert at the Theatre Guild in Georgetown on Friday March 31st, and a Public Lecture, also at the Theatre Guild, on Thursday 6 April.