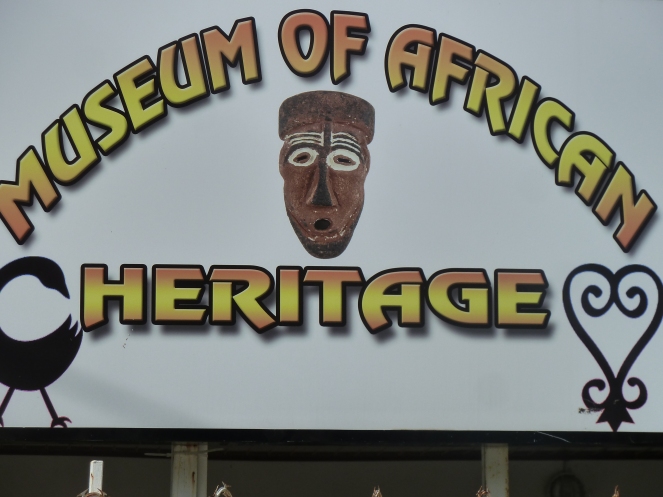 Dropping me off outside Guyana’s Museum of African Heritage on Barima Avenue, my friend hung around to see if it was actually open. “I’ve never actually been here,” she said, peering at the sign. The closed gates didn’t look promising.

I had only discovered the museum existed a few days earlier, after walking up the wrong road (something that happens often to me). But being within walking distance of the National Zoo, Botanical Gardens and Castellani House, it’s actually well placed for the enterprising visitors who track it down.

Luckily, it turned out, the museum was open – and I wasn’t the first visitor that day. “We had a tour earlier,” said the friendly guide optimistically (admitting later that before starting work there, even she hadn’t heard of it). More promotion was needed, we agreed.

Until 2011, the museum was known as the Museum of African Art and Ethnology. According to the tourism board, it was renamed to “open their doors to a wider audience and begin to fully address the African experience in Guyana”. Most of the museum is still given up to artefacts from (predominantly) the West Coast of Africa and neighbouring Suriname, but there are artworks by local artists too.

On entering the top floor, you’re immediately met by a small replica of Guyana’s famous moment to Cuffy (more in this post)– an African slave who led the great slave revolt of 1763 in what was then the Dutch colony of Berbice. Most of the lower floor of the museum is dedicated to Cuffy and his men, too. 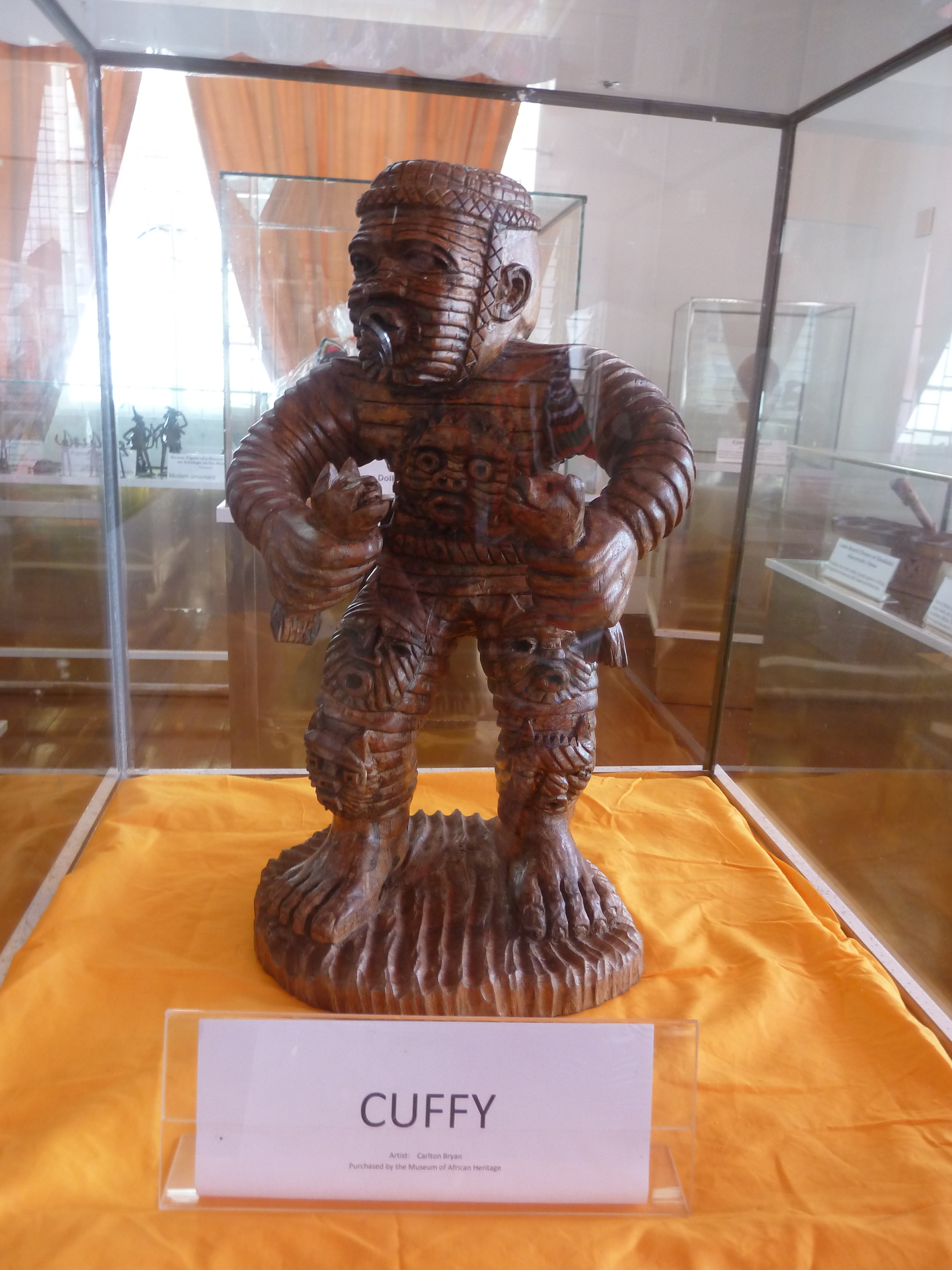 The Dutch began bringing Africans to the colony as early as the mid-17th century. Over the following years, thousands of slaves were captured and transported over the seas in appalling conditions, for a life of back-breaking work, oppression and abuse.

Today, Guyanese of African ancestry make up around 30.2% of the population – according to the 2002 census. (There was a census in 2012, but the preliminary report makes no mention of ethnicity and I cannot find anywhere the final version, which was ‘due soon’ last May.)

The connection between Africa and the Guyana of today is made by the contemporary art itself, which tackles themes including slavery, unification and revolution. Like this striking piece by artist Ras Iah entitled ‘Escape Mental Slavery’: 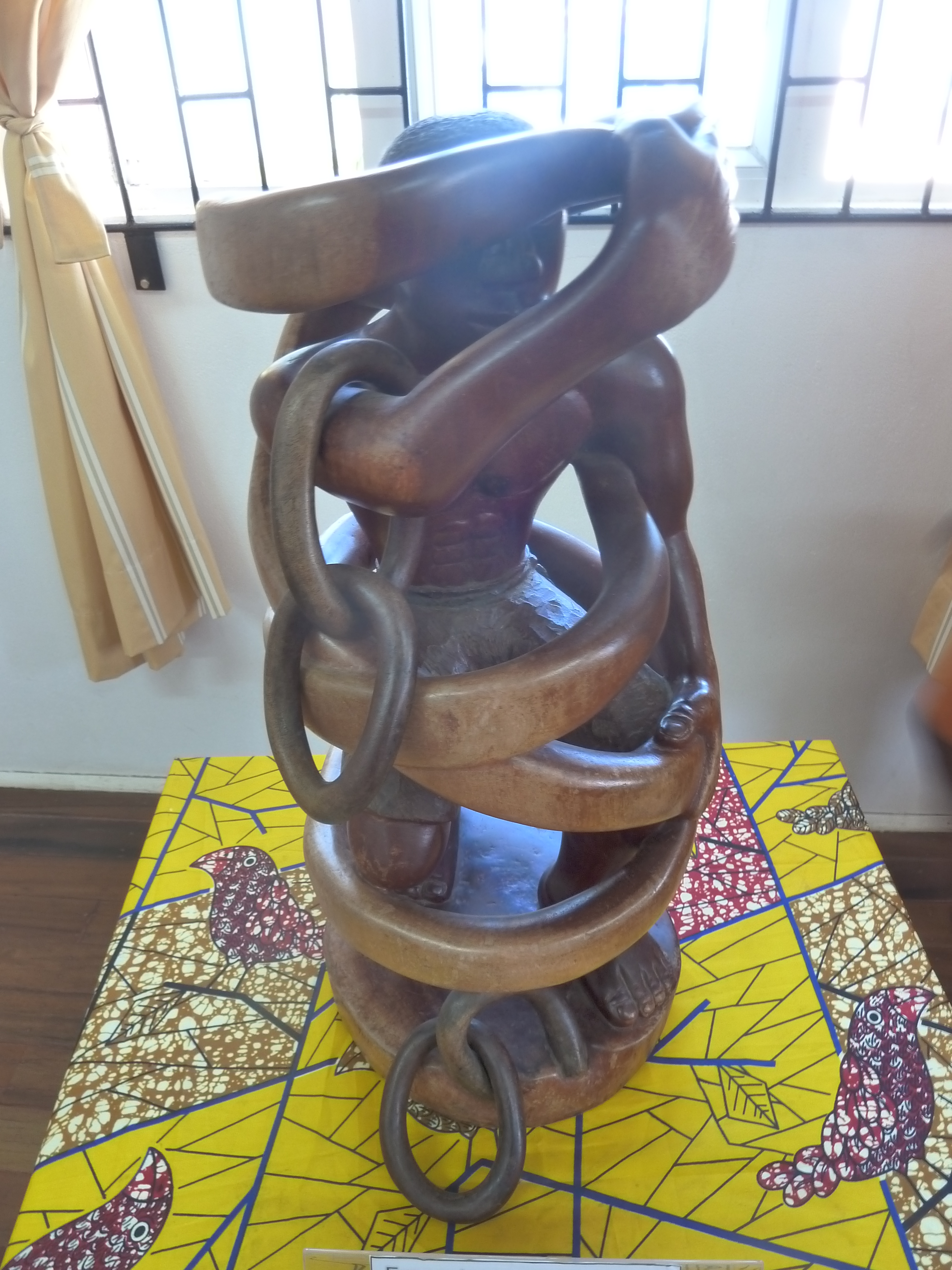 There’s also a great painting that imagines the pioneering group of former African slaves who clubbed together to buy their own plantation village and make it their home of freedom. But I’ll save that one for you to discover in person.

Museum of African History, Barima Avenue, Bel Air Park, Georgetown Guyana. Entry: Free. Getting there: Take the number 40 bus and get off near Popeye’s. 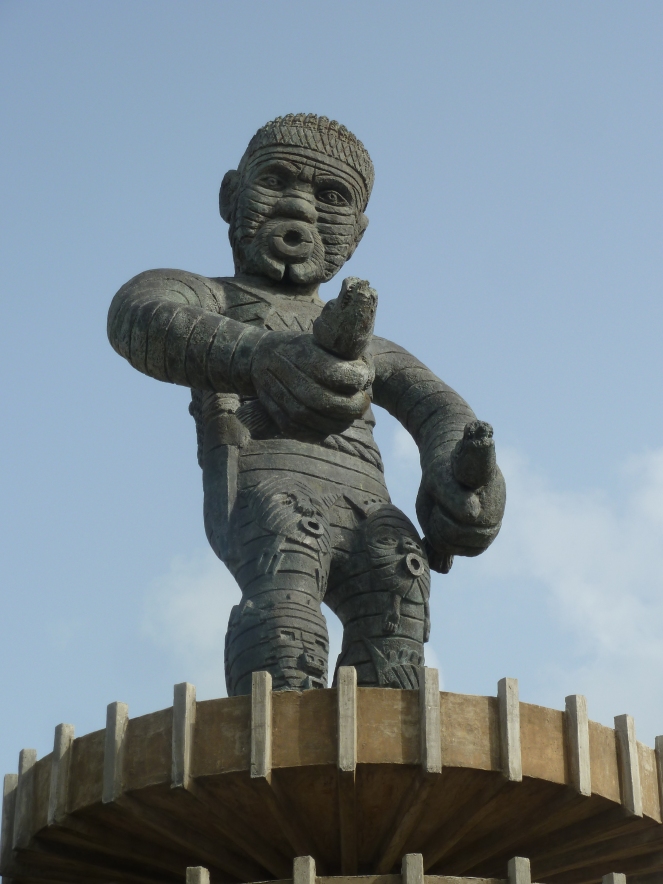 On a visit to D’Urban Park in Georgetown yesterday in search of the giant Guyana flag unveiled on Republic Day (23 February), I encountered the 1763 Monument (better known as ‘Cuffy’).

This striking statue was built in remembrance of the African slave rebellion which took place at a plantation in Berbice that same year. Created by Guyanese artist Philip Alphonso, it was unveiled on 23 May 1976.

According to local arts venue Castellani House (via Stabroek News), the figure’s pouting mouth is a sign of defiance and resistance. While in his hands he throttles a pig and dog – the pig representing ignorance; the dog covetousness, lust and greed. “This image … is inspired by a quotation from the Holy Scripture: ‘Cast not your pearls before swine nor give what is sacred to the dog.'”

Beyond the powerful figure of Cuffy, the super-size Golden Arrow flag was still nowhere to be seen. Surely a 65 × 35ft piece of patriotism isn’t lost so easily? Fear not, a friendly security guard told me, the 180ft flagpole has been taken down for extra reinforcement. “But don’t worry, it’ll be back in time for Independence Day!” 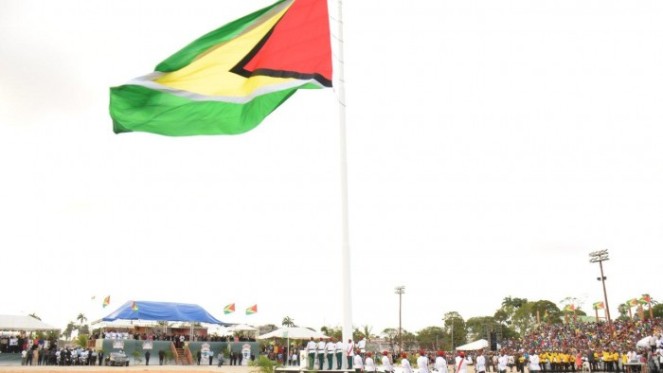 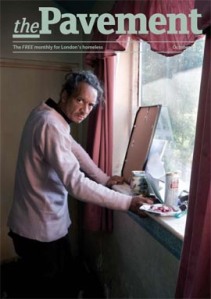 (The Pavement, 6 October 2011) Following the rescue of 24 “slaves” from a traveller’s site in Bedfordshire, it has emerged homeless people are being abused as slave labour.

The dramatic police raid at the site has received huge national and international coverage, as details of the conditions in which the men were held emerge. Detective Chief Inspector Sean O’Neil, from the Bedforshire and Hertfordshire Major Crime Unit, said: “The men we found at the site were in a poor state of physical health and the conditions they were living in were shockingly filthy and cramped. We believe that some of them had been living and working there in a state of virtual slavery, some for just a few weeks and other for up to 15 years.”

Although Bedfordshire Police were unable to confirm this to The Pavement, the Guardian has reported that those found were “all vulnerable men who had been recruited from homeless shelters and dole queues”. They ranged from 17 to 30 and include ten British men, three Polish men, two Romanian men, a Latvian man and a Lithuanian man. Of the 24, nine chose not to assist the police and left the medical reception centre where they were initially taken. The police have been working with the UK Human Trafficking Centre on the operation, which is according to a report in the Times is suspected to be part of a wider slavery chain holding up to 100 captives. Although in a statement from Bedfordshire Police, Detective Chief Inspector O’Neil said: “I am confident that while the investigation is in its early stages this is a family run ‘business’ and is an organised crime group that has been broken up by the Netwing operation.”

Following the raid at Greenacre caravan site in Leighton Buzzard, four men and one woman were arrested using new legislation under the Slavery and Servitude Act 2010. The men – James Connor, 23, Tommy Connor, 26, Patrick Connor, 19 and James Connor, 33 – appeared at Luton Magistrates Court and have been remanded in custody to appear at Luton Crown Court on the provisional date of 5 December 2011. The fifth defendant, Josie Connors, 30, was charged with two counts of conspiracy to commit offences of holding people in servitude, plus two counts of requiring people to perform forced labour, appeared in court on 22 September.

For many homeless charities, although the accusations are appalling, they are not a surprise. Thames Reach spokesman Mike Nicholas said, “We’ve been concerned for a number of months now that unscrupulous gangs are targeting homeless people. We’ve been made aware of cases where people from these gangs have approached people where homeless people gather, like soup runs or day centres.”

In total, Thames Reach has been approached by 22 people who’ve run away from the gangs, and received reports from London, Birmingham, Manchester, Southampton, Dover and Luton. “Many were trafficked across from Central and Eastern Europe with offers of jobs and accommodation,” explains Mr Nicholas, “and then when they got here these jobs failed to materialise and often people were subject to physical assault, maybe had to take credit cards or bank accounts out in their names, or were forced to work in factories. We were aware of people being shipped every day from a property in the Midlands to a bakery in Luton.”

In response, Thames Reach put out a warning to other homeless organisations and projects last March. In terms of helping the victims themselves, Mr Nicholas outlined a few possible avenues: “We could help put them in touch with the police if they had been victims of these gangs… Some of them are very fearful and don’t want to talk about their experiences and they’re worried about repercussions and so we’ve been helping some of those people go home. Other people are currently here in safe houses and there are police investigations taking place.”

For Jad Adams, Chair of Croydon Nightwatch, the practice goes back much further: “Around three years ago we were getting a number of people who were coming to our soup run in Central Croydon and trying to recruit people. We challenged them and asked what they were doing and they were evasive. One of our team also followed them and took the numbers of their vehicles.”

Croydon Council also stepped in to help, collating the information to pass to the police, while the soup run’s volunteers began issuing leaflets in English and Polish. “Even if the clients themselves aren’t particularly concerned,” said Mr Adams, “the gang leaders are savvy and they know that we’re on to them.” Since then the Croydon Nightwatch hasn’t seen any more such recruiters.

So what was the advice in their leaflet? “It was to be aware,” explained Mr Adams, “but also to know exactly what the work is, what the rates of pay are and where you are going to be working. And never give away your passport or identity documents.”

This need for awareness has been echoed by many, including Mike McCall, St Mungo’s Executive Director of Operations, who said: “These reports are very concerning. Rough sleepers are some of society’s most vulnerable people. We need to be ever watchful that they aren’t being exploited.”