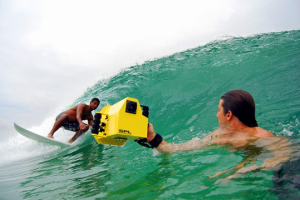 (Visit London, 5 May 2010) The weather may have been miserable this Bank Holiday Weekend (surprise, surprise), but in Kilburn the surf was up, the sun out and bikinis on.  Unfortunately, it was only in celluloid form, as Tricycle Theatre hosted the European premiere of Rio Breaks, a Brazilian surfer film with heart.

While the rain poured outside, we were transported to the beautiful beaches of Rio de Janeiro to meet two best friends; 13-year-old Fabio and 12-year-old Naama. For this cheeky duo, surfing is a total obsession – but also a saviour.

Born into a dangerous favela (or slum), the boys face obstacles as high as the hill they live on – including hunger, poverty, drugs, gangs and even murder. Their escape route is provided by a local surf club that offers free lessons and board loan to young people – on the condition they attend school.

Beautifully shot, the film is inspiring and funny – but still realistic; the boys aren’t angels, their future isn’t fixed and the violence continues around them. Yet their talent and passion shine through. And there’s some pretty amazing surfing, too!

We ended the night at local Brazilian restaurant Barraco, with a plate of juicy steak, rice and beans – and a berry caipirinha cocktail made with a liberal pouring of cachaça. Delicioso!

Rio Breaks is just one film from the ongoing London International Documentary Festival, which began on 23 April. The festival continues until 8 May and there are still lots more films to see, including:

Visit our London film festival calendar for more cinematic treats in the city, such as the current Terracotta Far East Film Festival.