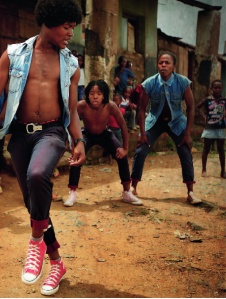 (ARISE magazine, Issue 16) When South African filmmaker Bryan Little was commissioned by Red Bull SA to shoot some short films for its Beat Battle, he was so amazed by the talented township street-dance crews he met that he decided they warranted a feature-length documentary. The result, The African Cypher, won the Audience Award for Best South African Film at this year’s Encounters Documentary Festival, was selected for the 2012 Durban International Film Festival and has rightly attracted a lot of interest overseas.

“The Cypher is the circle, especially in b-boy culture, where the battles and expression take place,” explains Little. “The name developed out of a sense that the circles, formed when people dance informally, are places of power, expression and identity”. The film takes the viewer around South Africa – predominantly Soweto, Orange Farm, Mohlakeng, Cape Town and the Cape Flats. “These areas are mostly known for being low-income or impoverished areas,” says the director. “But our experience was one of incredible richness in culture, courage and hospitality. We really tried to integrate ourselves into the lives of the dancers and the communities from a place of respect”.

The result is an intimate, candid and electric record of a vibrant dance scene, and likely to propel its protagonists into the spotlight. Prince and Mada of featured pantsula crew Shakers & Movers are now working on a theatre piece and have teamed up with the Cape Town b-boy crew. “Before the Red Bull event the b-boys had never seen pantsula [dance] and the pantsulas had only seen really bad attempts at b-boying in Soweto,” says Little. “Now they are performing together we might see some pantsula footwork in the b-boy six-step and, who knows, some flares in pantsula. In South Africa there’s an incredible propensity for innovation so there is no limit to what can happen.”