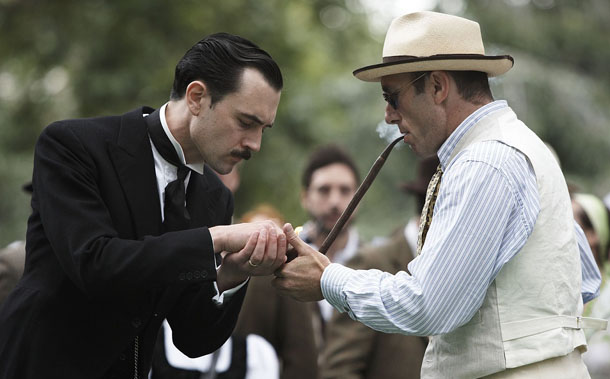 The days of top hats and butlers may be long gone, but the English gentleman lives on in London. The male equivalent to London Fashion Week, London Collections: Men, opened on Sunday. And on 13 July, the hilarious Chap Olympiad returns for its ninth year, with more Umbrella Jousting and Tug of Moustache. But where should a gentleman be seen in London? Here are some suggestions that would tempt even the Earl of Grantham away from Downton Abbey.

A barber-shop shave at Geo F Trumper
For the authentic English gentleman, stubble just doesn’t cut the mustard. Luckily Geo F Trumper has been doing a fine line in traditional wet-shaves and moustache trims since it was established in 1875. Step inside its original Mayfair store and you’ll find yourself transported back in time by its amazing displays of grooming products and beautiful mahogany-panelled private cubicles. Remember to book in advance.

Dress the part on Savile Row
Clothes maketh the man, so the saying goes. And when it comes to bespoke British tailoring in London, Savile Row is the place to visit. This famous road, parallel to Regent’s Street, has long been home to top menswear brands such as Richard James and Gieves & Hawkes. Looking for something a little more edgy? Head to Hostem in Shoreditch, a hip menswear/lifestyle store that runs a sideline in bespoke suits, shoes, suitcases and accessories.

Gentleman’s Afternoon Tea at Reform Social & Grill
Forget frilly tablecloths and flowery icing, afternoon tea at the Reform Social & Grill (located inside The Mandeville Hotel) is an undisputedly masculine affair. Think sweet rum & raisin pots, steak & snail sandwiches and meaty beef burgers, washed down with tea and a Bellini cocktail. It’s so good the idea has caught on, with Gentlemen’s Afternoon Tea popping up at other London venues such as Sanctum Soho.

Steak dinner at Hawksmoor
With its Art Deco style, plush leather seating and dark wooden décor, Hawksmoor Air Street near Piccadilly Circus looks like a modern gentleman’s private members club – and has the menu to match. Tuck into Britain’s finest “dictionary-thick steaks cooked over real charcoal” or alternatively go for the fresh seafood. Other Hawksmoor branches can be found in Guildhall, Spitalfields and Seven Dials.

A night cap at Albannach
According to 19th century etiquette, the men would remain at the table after dinner to drink and talk while the women retired to the drawing room. Today, it’s all about the post-dinner drinking haunt. Places like The Vaults bar at Albannach restaurant near Trafalgar Square, with its private booths and ‘cigars and whisky’ matching menu, or the vintage Whiskey Bar at No 5 Cavendish Square.

Chauffeur services
At the end of a long night, an English gentleman need only say two words: “Home, James”. Ensure your driver is ready and waiting to whisk you back to your hotel by making a booking with one of London’s top chauffeur firms, such as iChauffeur, Tristar Worldwide Chauffeur Services or Central Chauffeur Services.

Stay at Sanderson London or Hazlitt’s
Hang up your bowler hat for the night at Sanderson or Hazlitt’s. Sanderson is a five-star, design-led hotel with everything a modern gentleman needs, including an in-house spa, Billiard Room and 24-hour gym. While Hazlitt’s, also in London’s West End, goes for the more traditional style. Located in a group of historic Georgian houses, it offers old-fashioned hospitality and style – think heavy frames, antique four-poster beds and period features.