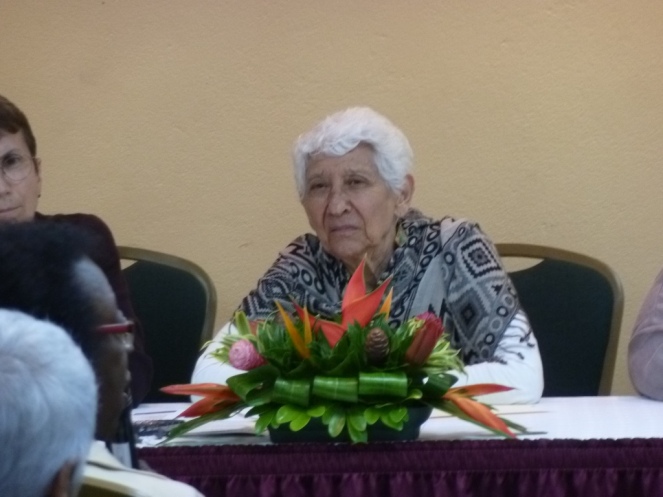 “What happened here tonight was the class struggle.”

The Woodbine Room at Cara Lodge was in some disarray. One person had stormed out, another came close to it. A third of the audience were eating brownies and pastries at the back of the room, immersed in heated discussions. While standing behind a tabletop bouquet of flowers, acclaimed international women’s rights activist Selma James was attempting to wrap up the evening. And decipher what had just happened.

It had all begun so differently. Selma James was in Georgetown to speak about her global campaign for fair wages for women – whether they work in the home or outside. As well as being the founder of the International Wages for Housework Campaign, Ms James co-authored ‘The Power of Women and the Subversion of the Community’, wrote ‘Sex, Race, and Class – the Perspective of Winning’ and contributed an introduction to ‘Ujamaa – The hidden story of Tanzania’s socialist village’.

She was joined by her colleague and partner Nina Lopez, founder of Legal Action for Women and joint co-ordinator (with Ms James) of the Global Women’s Strike. In the chair was Jocelyn Dow, with Vanda Radzik supporting on the floor with a roving mic.

The two guest speakers covered a lot of ground in their presentations to the room, which was – Ms Dow noted at the outset – encouragingly full. Ms James immediately put forward her reasons for why “every worker deserves a living wage – including mothers and carers”. She pulled up women who when they “have reached the top … have ceased to pay attention to what women need because they feel, and in fact they’re right, they’ve escaped what women on the whole face. They have often, more or less, equal pay with the men; they usually have servants…”.

She called on those present – which included members of Guyanese women’s rights group Red Thread (which organised the event), party political representatives, activists, students, academics and journalists – to recognise the need to be part of something wider. To, as the slogan goes, act local and think global. “You cannot really function in the modern world, you cannot really organise struggles; strengthen your network and resolve; and feel confident in what you are doing, if you are not trying to build an international network.”

She even managed to fit in a bit of US politics, showing her support for Bernie Sanders as the Democratic candidate for the presidency of the United States:

“Bernie Sanders is exactly from the background that I come from … when I lived in Brooklyn in the 30s and the 40s, everybody around me was a Socialist. I come from that community. From the same kind of community he comes from – and he’s running for President of the United States. Now that is a change! Whatever happens with that election of the presidential candidate, the United States will never be the same. There’s a movement for change, a movement against the military sucking up … taking all the wealth of society and putting [it] into weapons of mass destruction, which kill people. This is not what we want our money to go to. We want it to go first of all to mothers.”

As a former resident of Trinidad (where she lived with her then-husband CLR James, the late cultural historian and renowned social activist), Ms James is obviously familiar with discourses around racial, social and economic inequality in the Caribbean context. While many white, Western feminists are accused of excluding black women from the global feminist movement by not addressing the issues that are pertinent to them, Ms James put them in the spotlight. She cited the work of Bajan-American activist Margaret Precod, who (to quote the The Grio) “founded the Black Coalition Fighting Back Serial Killers in the mid-1980s after dozens of women were found dead in alleyways, parks and dumpsters in Los Angeles”. She recognised the role of Guyana’s own prominent women’s right campaigner Andaiye in pushing the UN and national governments to agree to measure and value unwaged work. She noted that “The Black Lives Matter movement is only now acknowledging that the women who were murdered are part of the movement, because somehow Black Lives Matter has been fundamentally translated as ‘black men’s lives matter’.”

Ms Lopez added more details about the Crossroads Women’s Centre in London. She spoke about custody of children (asking about the situation in Guyana, to which one lawyer in the audience responded: “The court would usually take into consideration the best interests of the child”). She cited the case of Layla Ibrahim, who was jailed after reporting a sexual assault. And she spoke with optimism about Jeremy Corbyn, the new leader of the Labour Party in the UK and an advocate of the legalisation of prostitution.

When the time came for audience questions, no hands were raised. Were there really no questions? The awkward silence didn’t last long. One person challenged Ms James on the very idea of ‘costing’ women’s work in the home – as if you can quantify and categorise levels of caring and housework. Some supported the point, others disagreed. Ms James questioned whether any woman would turn down the wage if offered. One of the two men in the sea of women pointed out the difficulties or inappropriateness of trying to affect changes within the same “Babylon” system that Caribbean people are trying to escape from. Two women highlighted the Married Persons Property Act, which women can claim “but they will get a much lower percentage if they have not worked outside of the home … it’s not recognised as equal value.”

An attending parliamentarian made a lengthy speech about everything from the migrant crisis to poverty in Guyana to the way the UN’s goals have become “sanitised”. Other audience members started getting restless and one or two called on her to let others have their say. When she left, the air became increasingly charged. One of the activists present spoke heatedly about female politicians talking about lifting people out of poverty in Guyana while not knowing what was happening at the grassroots level. The remaining parliamentarian took offence at being “embarrassed”, insisted she too had come from “grassroots” and eventually walked out in disgust. The activist made as if to follow but was convinced to stay, with some urging more “decorous” language and others insisting the remarks were not personal and that the politician should listen to views from the grassroots, which they are meant to represent.

Ms James, far from seeming intimidated, scandalised or sidelined by the lively exchanges, took it in her stride. Acknowledging this was a “class struggle”, she aligned herself as a grassroots person and called once again for women at the top to not forget the women at the bottom. Eventually she was given a hearty round of applause and allowed to explore the enticing snack table, before signing some books.

The Battle of Cara Lodge was a small one, but somehow a microcosm of the bigger fight raging outside. Racial tension, class warfare, cultural differences… One night and a 50-something crowd of (mostly) women cannot solve everything. But, Ms James noted, you can’t hope to have success in the wider world until you can achieve it in one room, with women from all levels of society coming together:

“In a lot of countries, the grassroots have got together and faced the government and said: ‘You have been stealing, you have been pimping, you have been enjoying the life that we are denied’. That’s happening in country after country … We as women have much in common. It is we as women who should be the first to overcome that problem or at least to address it. You cannot ignore it.”

3 thoughts on “Selma James in Guyana: “We as women have much in common””