The festival began in May, when the Theatre Guild staged Playing Chess With A Blind Man by Rae Wiltshire; Come Back to Melda by John Campbell; Some Other Nights by Nicholas Singh; Obeah Koksen by Professor Kenn Dance; Guilty Pleasures by Nicola Moonsammy; Til Death by Tashandra Inniss; Summer Breeze by Linden Isles and White House on Black Street by Clinton Duncan.

I only got my act together for the June programme. And even then, I was sorry to have missed Sauda, written by Mosa Telford, which I heard was excellent. Also The Colour of Rage by Sonia Yarde and A Green Card Marriage by Harold Bascom. But I managed to catch four productions. 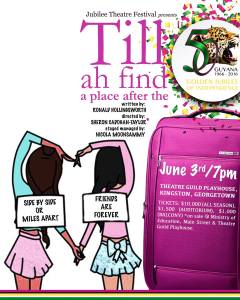 The first, Till Ah Find A Place by Ronald Hollingsworth, was a cracking comedy of infidelity, deception and unwelcome guests. Directed by Sheron Cadogan-Taylor, the play was classic soap-opera territory – man and woman happily married, woman invites friend to stay, man is furious, wife goes away for work, man and friend fight… and end up in bed, chaos ensues. But the sharp writing and energetic performances brought fresh energy to a familiar story, keeping it lively and funny throughout.

The packed audience were delighted; roaring with laughter, tutting with disapproval at some new sign of duplicity, nodding in recognition at familiar scenes. The two leads were excellent. Leslyn BobbSemple, as the homeless friend Donna, moved seemlessly from pitiful victim to bold seductress to scheming chancer. While Mark Kazim put in a brilliant performance as the frustrated husband, Linden, torn between his jet-set wife and live-in lover. The two had great chemistry and rapport, managing to communicate expressively even when reduced to just wildly gesticulating at each other when Linden’s wife’s back was turned. Donna’s boyfriend (played, I believe, by Sean Thompson) also made a well-received cameo, with his low-slung pants and whiney attitude.

Benjie Darling had a hard act to follow. But the play, written by Paloma Mohammed and directed by Rae Wiltshire, held its own. Colleen Humphrey and Simone Dowding played the two unmarried sisters: one romantic and yearning for children, the other hard-nosed and seemingly with a heart of ice. The best lines, however, were reserved for the Benjie of the title, played by Clinton Duncan. With his tufted beard, sprightly frame and gardener’s vest, Benji was alternately thoughtful and intelligent, and greedy and opportunistic. Whether he was eavesdropping at the side of the house, swaggering importantly around the house or counselling his wife-to-be, Benji always seemed to steal the scene.

Some of the climactic moments, such as when it’s discovered that the meanspirited sister blocked her sibling’s one chance for marriage when she was younger, somehow didn’t feel as dramatic as they could have. Either because they were drowned by the music, delivery, or script. And it felt like the play could have been edited down, to clarify the dialogue in parts and pick up the pace moving. But I enjoyed it – and think it was a remarkable achievement considering that due to rehearsal space, the cast and crew apparently only had a week to prepare the show. With a bit more time and work, this play could really bring the house down.

The next night (no rest for the avid theatre goer) saw the return of Frank Pilgrim’s Miriamy – first performed at the Theatre Guild in 1962. But despite the references to telephone operators and gentlemen’s clubs for white visitors (who knows, maybe these still exist in GT…), the play was as fresh as ever. The story centres around the news that a woman on the fictional island of St Midas is due to give birth to quintuplets – but brilliantly this woman, the Miriamy of the title, is never actually seen. Instead we view everything through those around her – the gossips, the lovers, the family and the press.

Directed by Ron Robinson, the production had a wonderful cast. Lloyda Nicholas-Garrett was excellent as the poised, pert and glory-seeking doctor’s wife, Stella Singer. Nikose Layne neatly captured the inquisitive reporter, never without his notepad and always with a nose for a story. While Leon Cummings was superb as the village clerk Desmond, an overly dramatic, self-aggrandising meddler. His expressive eyes and flamboyant gestures, of a cunning man determined to find fame and fortune by any means possible, were comic gold and I found myself throwing my head back in laughter.

All the cast were great in fact, from the lead roles to the smaller parts. particularly the sullen maid Dulcibelle; the brilliantly long-winded village clerk (played by Henry Rodney); and drunken rum-maker Garcia – a brief but memorable appearance from Mark Kazim, again demonstrating his talent for well-timed, physical comedy.

The theatre festival ended yesterday with a production of Francis Quamina Farrier’s Journey to Freedom, directed by Godfrey Naughton. Very admirably, the show was free and I hoped the crowds would flock to the National Cultural Centre to see it. Unfortunately the auditorium was only about a third full. Nevertheless, I was hopeful of a good night, having read some of Mr Farrier’s excellent online work.

Part play, part musical, Journey to Freedom was an ambitious undertaking. The aim seemed to be to celebrate and unite Guyanese of all races and backgrounds. There was a kwe kwe ceremony with live drumming, two operatic performances, blasts of Indian music, acoustic Creole Rock from the very talented Gavin Mendonca, contemporary dance, big all-cast music numbers, a solo singing performance… all interspersed with a series of mini dramas set in one close-knit neighbourhood: the reformed boy turned bad; the bush man and his vaqueiro friend; the love-struck sister and the local lothario… there was so much going on that at times it became too much.

The writer clearly had a great deal to say, but this meant some of the characters began to feel a bit like mere instruments to express a particular moral lesson or idea to improve life after independence: start a housing cooperative, join the national service, believe in Guyana’s potential, don’t look to the colonisers… This is all fine – if this is a musical not a play. But I felt it wasn’t sure what it wanted to be. I could see it as a high-kicking, big energy musical. It would be fantastic – a real celebration of Guyana and showcase of its talents. But for this to happen I think the dialogue needs to be chopped down, the music and dance numbers polished till they shine, and the time reduced from what I think was about three hours to a more manageable two.

Critiquing theatre is always hard, especially when you know or have met some of those involved – and you’re aware that the theatre being produced has most likely been made on a shoestring budget with love, dedication and sacrifice. “Go easy on community theatre productions,” is the rule of thumb. But this isn’t amateurish work. I’ve been astounded by the energy and effort put into the festival by the organisers – and by the quality of some of the writing and performances. I’d love to see plays and musicals staged regularly in GT, resources given to support the creatives who make it happen, and theatre promoted as an inclusive form of entertainment.

Speaking of which, I noticed The National Cultural Centre didn’t enforce its strict dress code last night. (At least, I spotted some sleeveless tops in the crowd). I was glad for this. And also for the affordable pricing of the shows throughout the season – $1,000 and above – although I’m sure that’s still prohibitive for some. From this small introduction to Georgetown’s lively and very homegrown theatre scene, I think it’s going in the right direction – and long may that continue.