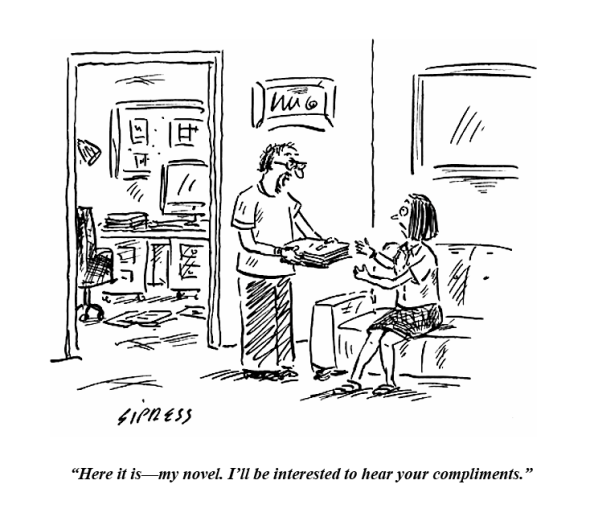 People talk of being slighted or blacklisted for having criticised institutions or individuals.

“Guyanese don’t do criticism”, say some. Others complain, “People always knock you down here”.

There’s a difference between a critic and a hater. To criticise you care, you want it to be better. But people mistake this love for hate.

Criticism doesn’t come naturally. It is a muscle honed, a skill developed with time and practice. We may feel it in our gut, our bodies may respond unconsciously, but unless we can articulate why we like or dislike something it is of little help to the artist.

There’s a skill to both giving and receiving criticism.

The praise sandwich is the most popular technique when giving: say something you like, then something you don’t like, followed by another layer of sugar. Soften the blow. Instead of saying, ‘I don’t like…’ or ‘It was just bad‘, say ‘I didn’t understand why…?’ or ‘Have you thought about…?’

How to get constructive criticism is another matter. But producers of creative works or public services can encourage this through Facebook, Twitter, Instagram, TripAdvisor, comment cards, email requests/surveys, Q&A sessions, focus groups… At the recent Timehri Film Festival, feedback forms were offered, asking three basic questions: What did you enjoy, what didn’t you enjoy, what could we improve?

Accepting criticism is just as tricky. But if you find yourself agreeing with the criticism or notice that what they pointed out has niggled with you too, then you should probably listen carefully. And if you disagree, well… you should listen carefully anyway, and be prepared to defend your decisions or work.

Criticism challenges us and often leads to better outcomes. When I was writing a BBC article on Guyana’s high suicide rate, I sent a draft to a friend whose honest opinion I value, who made me realise that my original opening paragraph was a bit invasive and overly dramatic. I knew something wasn’t right but needed someone else to vocalise it.

Criticism is also about resolving misunderstandings. That same article was translated into Spanish and Portuguese for BBC Mundo. Only recently I realised that the editors had captioned my photo of Georgetown Hospital’s psychiatric unit as “como uma prisão” (“like a prison”) in reference to the grilled drugs dispensary – not understanding that such grills are commonplace in Georgetown. I wasn’t happy with the choice of words – or the stock photo that had been used of a stoned-looking white man clutching his head. Which said nothing about Guyanese people, or the realities of mental health.

How many people also baulked at the words – like the friend who tentatively mentioned the caption just a few days ago in a discussion about tone and writing about Guyana as a foreigner?

Since coming to Guyana I can think of only two occasions where I’ve received direct public criticism for my writing. Once was for my (on pause, don’t ask) oral history project, which was summarised as “life under the whiteman is god reflectioneerin shizzle” on Mark Jacobs’ slicing blog. I angrily wrote some earnest and offended comment, but actually it helped me think about who I was doing the project for. In writing ‘Nearly 50 years on, we wonder: what was life like in those pre-independence years?’, who was the ‘we’?

The second time was in response to my open letter to Prince Harry. Two readers criticised me for writing apparently on behalf of Guyana. “Leave the prince alone. What the hell does he have to do with the past? And what the hell are you doing in Guyana,” said ‘Anna maria’. ‘Printmeink’ added: “You sounded like a trouble maker acting on behalf of the Guyanese people when you addressed the reparations. This was very offensive as you have no authority to even go back into time not yours.” Again I defended myself, but again I used the criticism as an opportunity for self-reflection. Was I actually being offensive by saying ‘we’? Which ‘we’ do I belong to? Do I have a right to join the #notmyprince debate and other issues surrounding colonialism when I’ve lived in the UK most of my life?

Far from driving a wedge between us, conscious and well-meaning criticism brings us together and promotes progress, self-improvement and quality. Why do artists, musicians, chefs, writers, directors, actors… all of us anxiously await reviews? Partly because the feedback could help or hinder our careers, but also because artists need knowledgable people to analyse, question and understand their work. It shows them that their message has or hasn’t got through, it makes them reflect on and develop their practices, and it points out holes they need to fix. You don’t get that from fans.

Obviously a review is just one person’s opinion, but if the person writing or saying it is someone whose views and analysis you respect, you should listen to what they have to say. The most talented creatives I’ve met are not the ones who belittle others, boast of their own genius and dismiss criticism, but the ones who invite discussion, collaboration and debate. Who see the creative process as a never-ending journey. Who would never presume themselves to be the greatest, because they have too much respect for their peers.

Reading Media Diversified this morning, I came across this review of Vasco Araújo’s Decolonial Desire exhibition. The reviewer was knowingly “emotional” and highly critical of Araújo’s intentions and lack of self-reflectiveness: “I wonder if underneath his self-assuredness Araújo is aware that he has, in this room, recreated the human zoos he is trying to critique.” I understood her dismay and disappointment. Yet I also felt curious about seeing the exhibition myself, finding out more about people and places cited – like Ota Benga, the Congolese rubber workers and transgender Black actress Jenny Larrue – and making my own judgement. And isn’t that what a review should do?

2 thoughts on “Why we need critics”